Get the latest updates from the BELAY blog right to your inbox.

Listen. We don’t want to bore you with an introduction that suggests that you don’t actually know the answer to the titular question, nor do we want to insult your intelligence.

You know the answer. So really, if we’re being completely open and honest with ourselves, the real question should be: Do you know what distinguishes a leader from a manager and, to take it one step further still, do you know how to become that leader?

But knowing what we should do and actually doing it could be – and often are – two very different propositions.

Leadership vs. Management: How To Spot The Differences

In our research on how to most succinctly encapsulate the often subtle differences between leadership and management, we found this article from the Harvard Business Review. And, if we’re being honest, we couldn’t have said it better ourselves.

See what we mean? It’s a subtle – albeit critical – difference.

As HBR.com says, “You’re probably counting value – not adding it – if you’re managing people. Only managers count value; some even reduce value by disabling those who add value. If a diamond cutter is asked to report every 15 minutes how many stones he has cut, by distracting him, his boss is subtracting value.

“By contrast, leaders focus on creating value, saying:”I’d like you to handle A while I deal with B.” He or she generates value over and above that which the team creates, and is as much a value-creator as his or her followers are. Leading by example and leading by enabling people are the hallmarks of action-based leadership.”

Ask yourself: Do you talk-the-talk or walk the walk alongside your employees?

“The quickest way to figure out which of the two you’re doing is to count the number of people outside your reporting hierarchy who come to you for advice. The more that do, the more likely it is that you are perceived to be a leader.”

Ask yourself: Do your employees do as you ask because you wield more power than they do or because they respect you?

“Management consists of controlling a group or a set of entities to accomplish a goal. Leadership refers to an individual’s ability to influence, motivate, and enable others to contribute toward organizational success. Influence and inspiration separate leaders from managers, not power and control.”

Ask yourself: Are you more fixated on the people contributing to the greater good or simply their contributions?

But don’t just take it from us or the Harvard Business Review. Take it directly from Bryan Miles, our fearless CEO and Co-Founder of BELAY (since we’re on a quote kick):

“We’re often asked, ‘How do you hold people accountable? How do you know they’re putting in their time and getting their job done? How do you keep them motivated?’
The answer is simple: Results. It’s not about hours or processes; it’s about results.”

And if that’s still not enough to crystallize the subtle-but-critical differences between leadership and management, maybe this illustration one of our contractors whipped up for her three kids to help them understand the difference.

Child’s play. Doesn’t get simpler than that, does it? 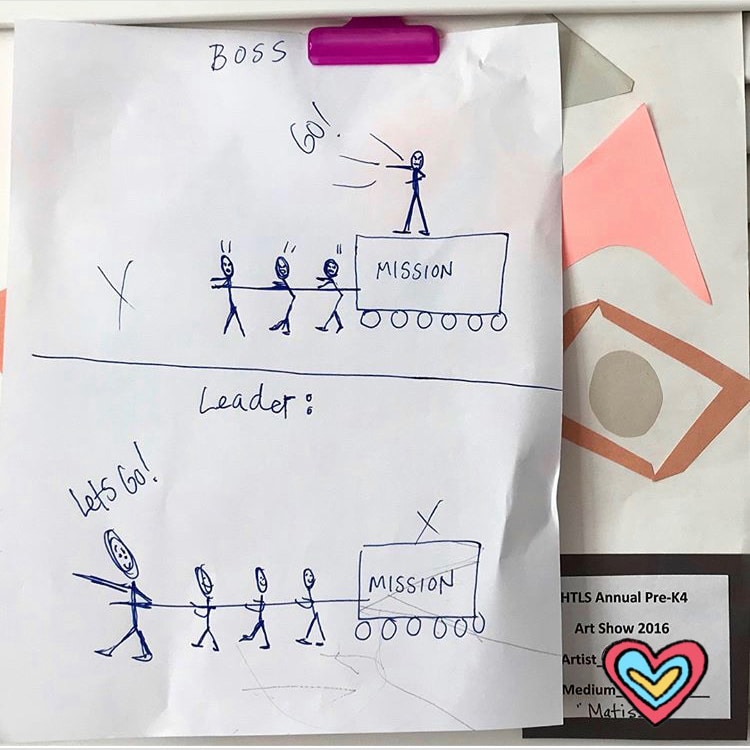 Get the latest updates from the BELAY blog right to your inbox.

NEED OUR SERVICES TO HELP GROW YOUR ORGANIZATION?

Currently, we’re only able to support organizations based in the United States and Canada.